So my Marfa Mondays Podcasting Project got temporarily hijacked. Resuming ASAP! There are 11 podcasts so far, and there will be 24. I have been off reading about the Mexican Revolution (well, that is relevant to Marfa, after all... as we shall see...) for the revised and expanded introduction to my translation of Francisco I. Madero's secret book of 1911, Spiritist Manual, which has turned into a book itself. And it will be out this fall in both English and Spanish. And ayyy I am still revising... Hope to have it done and off to the editor this week.
(Yes, that Madero, leader of the 1910 Revolution and President of Mexico 1911-1913.)

Today, a little more about Dr. Krumm-Heller's osmotherapy, a kind of protoaromatherapy.

Fun factoid: Dr Krumm-Heller was practicing osmotherapy on the battlefields of the Mexican Revolution-- carrying around his vials of perfume to aid fallen soldiers. So though he did not publish his book, Del incienso a la osmoterapia (From Incense to Osmotherapy) until the 1930s, we do know he was practicing it while in Mexico with Madero, and in fact wrote the first draft of the book in Mexico at that time.

Herewith a few excerpts to give you a flavor of this most extraordinary work. 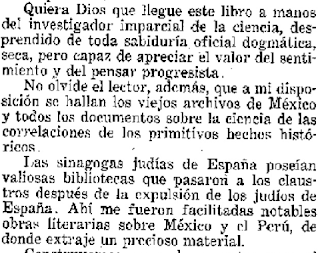 God wish it that this book may come to the hands of an impartial scientific researcher, one free from all official dry and dogmatic ideas, but capable of appreciating the value of the sentiment and approach of progressive thinking.

May the reader not overlook that, moreover, I have had access to the old archives of Mexico and all the historical documents on the now historic primitive peoples' science of the correlations.

The Jewish synagogues of Spain had valuable libraries that ended up in the monasteries after the expulsion of the Jews from Spain. There I had access to notable literary works on Mexico and Peru, and from which I extracted priceless material.


The ancient uses in the Mayan mysteries prescribed as oblations not only butterflies but especially roses. We find identical uses in the gnostic church, where they burn roses on the altar and bring sick people there, to cure with them with their perfume.

In Latin America, sorcerers employ all possible substances as carriers of poisons; most frequently, ashes, other times salt and even soap. The victim receives a gift of a little bar of soap and not long afterwards, he falls ill from its use. 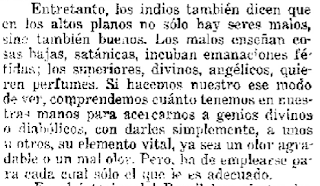 Meanwhile, the Indians also say that on the higher levels there are not only evil beings but also good ones. The bad ones show low and Satanic things, they incubate fetid emanations; as for the superior, divine and angelic beings, they love perfumes. When we adopt this way of seeing, we understand how much we have in our hands to draw close to these geniuses, both divine and diabolical, by giving one or another them their vital element, whether that is a agreeable smell or a foul odor. But it is necessary to utilize for each one only what is adequate.

To be alerted when my book (revised and expanded edition of Madero's Spiritist Manual) is available, click here.

***UPDATE 2014 My book, Metaphysical Odyssey Into the Mexican Revolution, is now available***