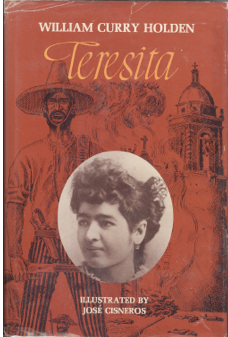 Rare book collecting update: Finally I got my hands on a first edition, a lovely one, autographed and with the dust jacket intact, of William Curry Holden's Teresita, illustrated by José Cisneros. First published in English in 1978, this is the first book-length biography of the Mexican folk saint and, as Holden details in his prologue, he and his wife Frances really did, and in the most extraordinary way, dig the story of her life out of obscurity, over many years interviewing hundreds of people, from Yaqui devotees to members of her family, and visiting out of the way archives on both sides of the US-Mexico border.

I'm all about rare book collecting these days, having realized that so many vitally important historical works (and sometimes in superb condition) are not all that expensive-- now. Most of the rare books I've been collecting recently, apropos of my recent book, Metaphysical Odyssey Into the Mexican Revolution: Francisco I. Madero's Spiritist Manual Introduced and Translated are in the range of, say, a pair of made-in-China shoes-- pretty darned cheap, and especially when one considers their historical importance. Some in fact could be compared to peanuts. I look for (preferably) first editions in as good a condition as possible, with dust jacket, autographed (ideally).  It's not rocket science. (That said, I do have Rare Book School on my radar.)

Though the subject of this latest acquisition, charismatic mediumnistic healer Teresa Urrea, died some years before the Mexican Revolution broke out in 1910, she is a key figure in the lead-up to it, and in the history of Mexican Spiritism (though she did not consider herself a Spiritist). I go on at some length about Teresa Urrea and the Tomóchic rebellion in Metaphysical Odyssey into the Mexican Revolution. She's also the subject of her great nephew Luis Alberto Urrea's two wonderful novels, The Hummingbird's Daughter and Queen of America.

The author of Teresita, William Curry Holden (1896-1993), was a distinguished Texan historian and archaeologist. Read more about him on the back cover of Teresita:


>My previous blog post on my copy of Leon Denis's Después de la muerte, translated by Ignacio Mariscal and sponsored by Francisco Madero and Francisco I. Madero, 1906.

>Excerpts from Metaphysical Odyssey Into the Mexican Revolution.