Guest-Blogger John Scherber, Author of Into the Heart of Mexico: 5 Expat Meccas 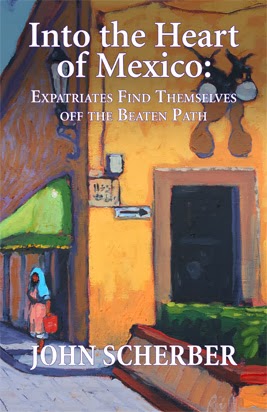 My San Miguel de Allende-based fellow-American, fellow writer and bodaciously successful publisher of San Miguel de Allende Books-- if you're lucky enough to attend this year's San Miguel Writer's Conference, look for him in the conference's bookstore-- John Scherber has a new book out, timely and informative reading for anyone considering a move south of the border: Into the Heart of Mexico: Expatriates Find Themselves Off the Beaten Path.

Herewith his guest-blog for Madam Mayo, featuring five of the several places he went to speak with expats for the insider story:

Everyone has been to Cancun. Everyone has heard of the large expat colonies in San Miguel de Allende and Lake Chapala. Exploring the expat phenomenon, I wanted to do a book about those living in places without much support from their own kind. Was this a different kind of expat? Or only one with better Spanish? The towns they lived in would each be a character in this story. Here’s where I went to talk with them:
-- John Scherber