Guest-Blogger Historical Novelist Claudia H. Long on 5 Secrets About the Crypto-Jews of Mexico

Delighted to once again host historical novelist Claudia H. Long, whose latest is The Duel for Consuelo. From her official bio:


"Claudia Long is a highly caffeinated, terminally optimistic married lady living in Northern California. She writes about early 1700’s Mexico and modern day and roaring 20's California. Claudia practices law as a mediator for employment disputes and business collapses, has two formerly rambunctious–now grown kids, and owns four dogs and a cat. Her first mainstream novel was Josefina's Sin, published by Simon & Schuster in 2011. Her second one, The Harlot’s Pen, was published with Devine Destinies in February 2014. Claudia grew up in Mexico City and New York, and she now lives in California." 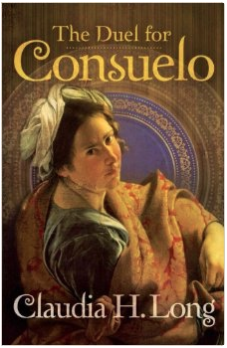 From the catalog copy of the new novel, The Duel for Consuelo:


"History, love, and faith combine in a gripping novel set in early 1700’s Mexico. In this second passionate and thrilling story of the Castillo family, the daughter of a secret Jew is caught between love and the burdens of a despised and threatened religion. The Enlightenment is making slow in-roads, but Consuelo’s world is still under the dark cloud of the Inquisition. Forced to choose between protecting her ailing mother and the love of dashing Juan Carlos Castillo, Consuelo’s personal dilemma reflects the conflicts of history as they unfold in 1711 Mexico. A rich, romantic story illuminating the timeless complexities of family, faith, and love."


5 SECRETS ABOUT THE CRYPTO-JEWS OF MEXICO
By Claudia H. Long

As practically everyone knows, the Jews were exiled from Spain in 1492, at the time of the Muslim expulsion. Persecution had gone on for centuries, of course, but Jews, Christians and Muslims had lived in an uneasy peace until the expulsion edicts finally put an end to co-existence.

But not all Jews left the only homes they had ever known. Contradictory edicts made it impossible to leave, mandatory to leave, requiring conversion, denying the merits of the conversion, all with the drumbeat of confiscation of wealth behind the acts. So not only were Jews required to leave or convert, they often were prevented from exercising either choice.

Conversos (those who converted to Christianity) and their descendants were fiercely persecuted. Any hint of Judaizing, or secretly practicing their old religion, was ruthlessly ferreted out by the Inquisition, which led Conversos to the practice of haciendo sábado, or "doing the Sabbath." This involved ostentatiously working on Saturday so the neighbors could see them, eating pork in public, and putting on other displays of Christianity. Nonetheless, many continued their Jewish practices in secret.

If they were "lucky" they converted and eventually got out. Some went to the New World, including Mexico and Peru. Mexico was something of a haven for the secret Jews, or Crypto-Jews at first. With so much novelty there was less time to spend ferreting out Jews, and more emphasis on political alignment.

All that changed in 1642. The Archbishop of Mexico became the Viceroy, his edict brought an end to the relatively safe lives of the Crypto-Jews.

One of the ways that Crypto-Jews were "caught" was through denunciation by family servants.

Clues to Judaizing included reports of special dishes being prepared on Friday before sunset, to be kept warm on banked coals through Saturday, or preparation of meats involving draining all of the blood from the meat before cooking.
Even cleaning the house on Friday, or bathing by women on Friday before sunset, all could lead to a denunciation.  The meticulous records kept by the Inquisition are a fertile source for recipes and housekeeping customs for Crypto-Jews of the era.

Some Jews only knew one blessing, many knew no Hebrew at all. Knowledge was passed down in the family, and with each generation the practices became more idiosyncratic, further and further removed from their origins. Tortillas and chocolate replaced matzo and wine during Passover. Burial practices, such as adding a pillow of dirt to the coffin replaced a burial in virgin soil. Fasting on particular dates following a death, such as the eighth or thirtieth day, replaced the traditional periods of Jewish mourning. These were examples both of adaptation to the New World and a loss of understanding of the actual rituals and traditions.

The Duel for Consuelo picks up the thread at this point, in 1711, when Consuelo, who only knows one blessing, is called to account by the Inquisition in its last gasps for power.

+ Guest-blogger Claudia H. Long with 5 Delicious Links on the Food of Baroque Mexico