THE COMANCHE EMPIRE by Pekka Hämäläinen: A Book Review by C.M. Mayo 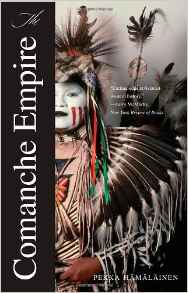 The cover of Pekka Hämäläinen's The Comanche Empire, of a ghost-white warrior with a trio of blood-red slashes down his cheek, is as arresting as the argument that, as it opens, the Comanches' was "an American empire that, according to conventional histories, did not exist."

In the United States public discourse conflates wildly heterogenous groups into easy categories— Native American, white, black, and so on and so forth— and then, with school board-approved narratives as mortar, we construct colossal political edifices. In their shadows, alas, many of us are blind to the complexities in our society and history. The complexities are riotous. And when we shine a light on but one of them— as Finnish historian Hämäläinen has in this brilliant study of Comanche hegemony— suddenly our easy categories and well-worn narratives may look strange, deeply wrong.

As those of you who follow this blog well know, I am at work on a book about Far West Texas, that is, Texas west of the Pecos River. Anyone who heads out there, especially to the remote Big Bend, hears about Comanches, e.g., they crossed the Río Grande here, they watered their horses there. But the Comanches, an equestrian Plains people who hunted the buffalo, were latecomers to the Trans-Pecos. They did not settle there; they trekked through it on the Comanche Trail (more aptly, network of trails) on their way to raid in northern Mexico. They returned driving immense herds of horses and kidnapped Apache and Mexican women and children in tow, for markets up north around Taos, New Mexico, and Big Timbers on the Arkansas, which garnered them metal tools, cooking pots, corn and other carbohydrates, textiles, and above all, guns and ammunition.


The Comanche were raiding south of the Río Grande as early as the 1770s, but their large-scale raiding in northern Mexico commenced in the 1820s, plunging deep into Chihuahua, Coahuila, Tamaulipas, Durango, Zacatecas and, in the 1840s, as far as Jalisco and the major central market and manufacturing city of Querétaro. This systematic "mass violence" which left the northern realm of the Mexican economy crippled and its people demoralized, turned it into what Hämäläinen terms "an extension of Greater Comanchería." Hence, by the late 1840s, when the U.S. Army invaded Mexico, what they were really invading was, to quote Hämäläinen, "the shatterbelt of Native American power." But this is to get ahead of the story.

Those of you have been following my related podcast, Marfa Mondays, may be wondering, where is the long-promised podcast #21 on the Seminole Negro Scouts?

After the US Civil War, the US Army invited the Seminole Negro Indian Scouts into Texas from Mexico, where they had taken refuge from the Confederacy's slavers, to help clear the Apaches and Comanches out of Texas. So I've been reading about the latter groups, whose history, it turns out, is far more wide-ranging and multifaceted than I had imagined. I may be a fast reader, but this is a monster of a bibliography. Add to that, in 2008, with Pekka Hamalainen's The Comanche Empire, the whole of the paradigm has been upended.

So stay tuned: by the by, podcast #21 on the Seminole Negro Scouts will be posted. Listen in anytime to the other 20 posted so far here.


>>Your comments are always welcome. Write to me here.

Q & A with Paul Cool on The Salt Warriors

The Harrowingly Romantic Adventure of US Trade with Mexico in the Pre-Pre-Pre NAFTA Era: Notes on Susan Shelby Magoffin and Her Diary of 1846-1847, Down the Santa Fe Trail and into Mexico

Peyote and the Perfect You: Some Notes

Desert America: Boom and Bust in the New Old West by Rubén Martínez

John Tutino on Looking at Mexico in New Ways

On the Trail of the Rock Art of the Lower Pecos

Q & A with Carolina Castillo Crimm on
De León: A Tejano Family History 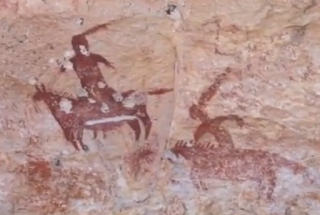