Waaaay Out to the Big Bend of Far West Texas, and a Note on El Paso's Elroy Bode

Earlier this month I traveled the loooooooong way out from Mexico City via Houston and then via El Paso to Alpine, TX-- (that latter stretch through the Far West Texas desert, spectacular though it be, not for the caffeine-deprived)-- to participate in the annual Center for Big Bend Studies (CBBS) conference at Sul Ross State University.

>>CONTINUE READING THIS POST ON THE NEW PLATFORM AT WWW.MADAM-MAYO.COM

I've been working on this book about Far West Texas, which includes the Big Bend, for an age & an eon, so last year, when I was invited to present at the 2016 CBBS conference, I was honored but flummoxed. My book hadn't-- and still hasn't-- been published and, anyway, it's not a scholarly work but, as I have begun describing it, a lyrical and personal portrait of place. No, no, what they wanted was for me to talk about my book published in 2014, Metaphysical Odyssey into the Mexican Revolution: Francisco I. Madero and His Secret Book, Spiritist Manual. I was flummoxed again, for that book about the book by the leader of Mexico's 1910 Revolution has zip to do with the Big Bend!

Well, it turned out that anything and everything about the Mexican Revolution is game for the CBBS conference, which is multidisciplinary and covers subjects relevant not only to the Big Bend but the surrounding regions, which include the Texas Panhandle, New Mexico, and northern Mexico's states of Chihuahua and Coahuila.

So last year at CBBS I presented Metaphysical Odyssey into the Mexican Revolution, and I came away mightily impressed-- so much so that I decided to present again this year and I recruited my amiga, Mexican historian Cecilia Autrique, to present her outstanding paper, "American Protestants, Civil Society Organizations, and Temperance on the US-Mexico Border, 1920-1930." (This paper stems from her PhD thesis at the UNAM in Mexico City, which I hope will be published as a book in both Spanish and English, for it provides vital historical context for any discussion of the current US-Mexico border and narcotrafficking issues.)

This year I presented my paper on "John Bigelow, Jr: Officer in the Tenth Cavalry, Military Intellectual, and Nexus Between West and East"-- much of which material will appear in my book in-progress, World Waiting for a Dream: A Turn in Far West Texas.

Look for the paper on my website shortly; in the meantime, for those interested, my blog posts about Bigelow are here and here, and the post about his brother, author, world-traveler, life-long friend to Kaiser Wilhelm II, and pioneer magazine publisher Poultney Bigelow, is here. And the selected bibliography on John Bigelow, Jr. and the Bigelow family, and related subjects, which I handed out at the conference, is here.

Bigelow's relevance to the Big Bend is direct: he was stationed there more than once, scouted all around the region, and indeed, he is an officer already well known to any and all who would study the Indian Wars and the Buffalo Soldiers. I trust I have been able to add new dimensions and insights to his importance for this region, and the West as a whole.

One of the downsides of a bustling conference (indeed, a downside to just about everything nifty in the human experience) is that it is impossible to be in two places at the same time! It can also be a challenge to fit fascinating and vital conversations, such as they pop up, into the precise times allotted for coffee breaks and lunch. Alas, there were talks I am tremendously sorry to have missed or to have had to slink into half way through.

Just a few-- a very few-- of the highlights for me:

Felix Almaraz channeling a Franciscan missionary (and in costume!)

Lonn Taylor's talk about J.J. Kilpatrick of Candelaria, Texas (right on the Rio Grande) during the Mexican Revolution
This is a movie! (Or has it been made already? If not, por dios, ¿porqué no?)
> Check out Lonn Taylor's always fascinating "Rambling Boy" column for the Big Bend Sentinel, and my podcast interview with him, "Under Sleeping Lion: Lonn Taylor in Fort Davis"

Once again, Al González of Chiricuahua Books busted my shoe budget for the year. I took home a biography of Jack Hays and two very rare books by cowboys about Marfa, Texas.

Ayyy, and gigazoodles of postcards!

A keynote speech by lead archaeologist Steve Black about Eagle Nest Canyon at Langtry, Texas
> One of the most jaw-dropping canyons in Texas. Check out my mini-video of the entrance of Eagle Nest Canyon from a visit a couple of years ago here.

(Perchance you wonder, did we see the Marfa Lights? Not this time. But I have indeed seen them and on four different occasions.)


AND A NOTE ON EL PASO'S ELROY BODE 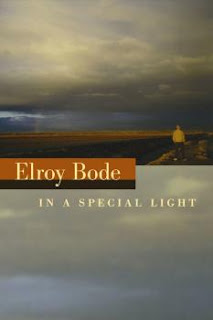 As you might imagine, flying from Mexico City to El Paso via Houston, and back, apart from being a sardine-y experience, was the perfect opportunity to get some reading done.

I have belatedly discovered Elroy Bode!* Doubly belatedly, for Bode passed away only months ago. (See his obituary in the El Paso Times.)

I devoured Bode's El Paso Days and got started on In a Special Light. As the blurbs on his books attest, Bode is much-admired and even beloved by many Texan writers and readers of a literary bent, but he remains obscure, not only outside the region but, as my visit to El Paso's Barnes & Noble attests, even in his home town. (Nope, the Barnes & Noble did not have in-store even one copy of Elroy Bode's -- "who? Brady?"-- several books. But for, like, totally sure, they did have, for the man in front of me in the customer service line, Exploding Kittens.)


"Elroy Bode is one of the most essential writers the state of Texas has ever been lucky enough to call its own. In a voice that is at once deeply descriptive and eloquently minimalist, he illuminates our corners, dim memories, streets, fields, prairies, hills, hours, and the hardest of days. His no-frills frankness and steady attentiveness have always had a radiant, carifying power."


As I read I tagged so many of Bode's lines but perhaps the best, most representative of all is this one, from "Earth-Life" in the collection of his poetic essays, In a Special Light:

"I need the El Paso countryside. I need to hear the call of redwing blackbirds from salt cedars along an Upper Valley canal. I need to stand in a pecan grove and feel the breeze that moves through it-- a breeze that reminds me of other breezes in other trees in other, almost forgotten times. I need to see stretched of plowed land where, in the distance, humans are reduced in scale and become of no greater importance to the eye than a rooster in a yard, a tractor in a field."


After the CBBS conference I spent an afternoon in the El Paso Public Library's Border Heritage archive where I looked up Elroy Bode and Amado Duro. More about those two caballeros literarios anon.

Tremendous Forms:
Paul V. Chaplo on Finding Composition in the Landscape
Posted by C.M. Mayo at 12:01 AM