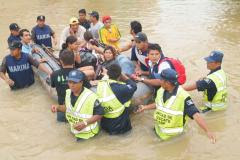 Mega-disaster in Mexico. According to this morning's Reforma, after several days of unprecedented rains, 80 % of the Gulf of Mexico state of Tabasco is now underwater--- the worst disaster ever to befall this state--- and the rains continue. Reforma also reports that--- no surprise--- most of the crops have been lost. (And here's the report in La Jornada--- 700,000 people affected, panic buying in Tabasco's capital, Villahermosa. And from Milenio, "New Orleans in Tabasco".) Tabasco is a major producer of bananas, corn, soybeans, rice, cacao, pineapples, papayas, and beef cattle. This is Mexico's "Katrina"--- the news is showing people and animals stranded on rooftops and an all-around horrific suffering--- though the Mexican government has been responding rapidly. The Mexican Army has been working hard to rescue people and shore up the levies, and yesterday the President and First Lady went to Tabasco. But the people of Tabasco desperately need help. If you're in Mexico City, you can drop off bottled water, canned food, diapers, clothes, aspirin, and such at:
Casa de la Cultura del Gobierno de Tabasco
Berlin 33, esquina Marsella
Colonia Juarez, Mexico City
You can also send money to the Mexican Red Cross:
Cruz Roja Mexicana
Jan Luis Vives 200
Colonia Los Morales P, Mexico City
Cash deposits: Cruz Roja Mexicana I.A.P.
0401010115 de BBVA Bancomer
sucursal Palmas numero 0683
tel. 10-84-90-00
You can confirm the above information and find updates at the official webpage of the state of Tabasco.
Posted by C.M. Mayo at 1:42 PM