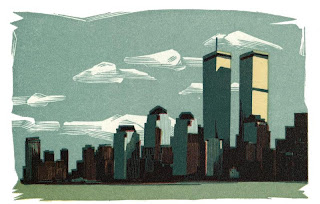 One of the things I find most fascinating about publishing now is the trend toward the ephemeral, on the one hand (e-books), and on the other, increasing material quality (collectors' books). So the very same book could appear as an e-book, and as a limited, autographed, letterpress edition with, say, handmade marbled paper. The first could cost only a few dollars, while the second could run into hundreds of dollars. (Where's the still big fat middle? Ye olde paperbacks shipped from amazon.com and packing the shelves in your local bookstore.)

Collectors' books, 19th century style, are often sold by subscription. This is the case with travel writer, essayist and writing teacher Richard Goodman's latest, or rather, forthcoming, The Bicycle Diaries: One New Yorker's Journey Through September 11th, which will feature original wood engravings by noted fine printer and wood engraver Gaylord Schanilec, to be published by Midnight Paper Sales. (Read the prospectus, a PDF, here.)

Apropos of this, I invited Richard to contribute a guest-blog post about literary New York. He's an expert on the city, having lived there for many years (check out his recent book, A New York Memoir.) Over to you, Richard.

The list of literary figures who have visited or lived in New York is long and, sometimes, quite surprisingly delightful. Here are some of my favorites from that list. I’m always eager to hear about more, so if you know of any surprises, please post a comment.

Henry David Thoreau in Brooklyn
(The link is to a video in which a librarian at the Library of Congress discusses the day in Brooklyn Whitman and Thoreau exchanged books).
The famed naturalist and solitary dweller at Walden Pond did step foot in New York City—where, as we know, most of its citizens lead lives of quiet desperation. In 1850, he came to Fire Island—today, summer playground for young Manhttanites—to look for the effects of a drowned friend of Ralph Waldo Emerson’s. In 1856, he was in Brooklyn where he met, and walked two hours with, Walt Whitman. Whitman gave Thoreau a copy of Leaves of Grass, which, it turns out, Thoreau liked very much. “We ought to rejoice greatly in him,” Thoreau declared in reference to Walt.

Antoine de Saint-Exupéry on Central Park South
(The link is to a New York Times article about a walking tour, "In the Footsteps of Saint-Exupéry")
The aviator-author of such lyrical classics as Wind, Sand and Stars and Night Flight lived briefly at 240 Central Park South in the early 1940s where he began his children’s classic, The Little Prince. He also lived on Beekman Place and in a rented mansion on the North Shore of Long Island before returning to France and a fateful rendezvous with a German fighter plane south of Toulon over the Mediterranean Sea.

Simone Weil on the Upper West Side
(The link is to Francine du Plessix Gray's biography, Simone Weil.)
In 1942, the wonderful, severe, brilliant and difficult French writer, Simone Weil, settled briefly with her family—including her equally brilliant brother—in an apartment at 594 Riverside Drive. The author of The Need for Roots eventually died in England, at age forty-four, later to become, in T.S. Eliot’s estimation, a saint.

Frederick Garcia Lorca in Harlem
(The link is to a New York Times article about his year in New York City.)
The celebrated Spanish poet, author of the plays, Yerma and Blood Wedding, spent 1929-30 in New York City where he attended, for a while, Columbia University’s School of General Studies — essentially, its school of continuing education. Out of this sojourn came his book, Poeta en Nueva York with its powerful poem, “El Rey de Harlem,” The King of Harlem.

Lorenzo da Ponte at Columbia University
(The link is to information about his grave in Queens)
The librettist for Mozart’s operas, The Marriage of Figaro and Don Giovanni, da Ponte was born in 1749 near Venice. After a long and colorful career as a librettist working with Mozart and his nemesis, Salieri, da Ponte came to New York to escape his creditors. He became the first teacher of Italian at Columbia, opened a bookstore, and introduced the works of Rossini to America. He died in 1838, and is buried — where else? — in Queens.

--> Click here for the complete archive of guest-blogs posts at Madam Mayo.
Posted by C.M. Mayo at 1:12 PM