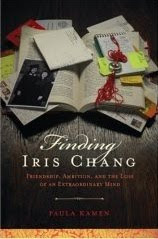 1. Finding Iris Chang
by Paula Kamen
Iris Chang was the author of three books, including the blockbuster The Rape of Nanking: The Forgotten Holocaust of WWII. Kamen, also an accomplished journalist and author of four books, was first Iris's rival at the University of Illinois Champagne-Urbana and then, for many years, an admiring and close friend. Kamen's is a book by a writer about a writer, or rather, the biography of a rich and evolving writerly friendship with a violent end, for Iris Chang was found shot to death in a car by the side of the road near her home in northern California. Chang was then working on a book about the Bataan Death March, and as she had a small son, a happy marriage, and blazingly successly career, many people found it easy to believe she had been murdered, though, as Kamen explains at length, Chang's life was not what it appeared. Kamen's is a deeply moving book that should be read by anyone who is or would be a writer; it's a terrible lesson in the dangers of unbalanced ambition and, at the same time, ironically, the advantages of unbounded ambition. Beautifully written and researched, this is a work to be savored, both on the page, and in many meditations afterwards. I know I will be rereading this one.

2. The Big Short
By Michael Lewis
I relished Lewis's late 1980s memoir of working at Salmon Brothers, Liar's Poker, which I would describe as laugh-out-loud funny and grimly picaresque. The Big Short is equally entertaining, but, well, not funny. It is in fact horrifying. Unlike many books on financial shenanigans, this one is written by someone who actually worked in investment banking, who has an insider's understanding of the culture and the mentality of those, alas, not so few, who aim to "game the system." So what happened to the financial system in 2008? To begin to understand, start here.

2. When a Crocodile Ate the Sun
by Peter Godwin
It might seem an exotic horror story: Mugabe's Zimbabwe. But it's so much larger than that. What transpires when the government really, truly, breaks down? How do you find bread when your money inflates to near-nothing? What happens to the old people? To the animals? The crops? And the names of things? In other words, this is a story at once ancient and ever-new, a story that, for as long human nature and human societies endure, we will go on telling in its thousands of permutations. But this time, this book, wow.

4. Las tentaciones de la dicha
by Agustín Cadena
Who is Agustín Cadena? Think: Franz Kafka meets Juan Rulfo meets Raymond Carver or, the Mexican Chekhov. But that's not quite right: he's unique. I've just finished translating one of the stories, "The Vampire"--- hope to have news soon about a home for that. And some excellent, though to me, unexpected news: this book was named one of the top books of 2010 by Mexican critic Carlos Olivares Baró.
P.S. Read my translation of an earlier short story by Cadena, "Lady of the Seas," which appears in Mexico: A Traveler's Literary Companion.

4. The Bolter
by Frances Osborne
A superbly written biography of Idina Sackville, "the woman who scandalized 1920s Society and became White Mischief's infamous seductress," by her own great granddaughter. Every chapter is a surprise, and the last one more than any. (Oddly, this gave me a more nuanced appreciation for the decor in the Ralph Lauren shops.)
5. John Bankhead Magruder: A Military Reappriasal
by Thomas M. Settles
This new biography of a key 19th century military figure, best known as a controversial Confederate general who defended Virginia and Galveston,Texas in the U.S. Civil War, it is also crucial reading for anyone interested in the U.S.-Mexican War, the Civil War, and / or Mexico's Second Empire.

6. Black Robes in Paraguay
by William F. Jaenike
This magnificent, deeply and scrupulously researched book will always have a place of honor in my library. It should interest anyone who enjoys Latin American history -- and that includes the history of Mexico's Baja California, because of the parallel stories of their Jesuit missions.

7. Move Into Life: The Nine Essentials of Lifelong Vitality
by Anat Baniel
Protégée of Moishe Feldenkrais, the Israeli engineer and Judo expert who developed the renowned "Feldenkrais Method," Anat Baniel built her own "Anat Baniel Method" (ABM) on this foundation and three decades of helping thousands of people, from the tiniest babies to elders, move more easily and find freedom from pain. I have tried the ABM: gadzooks, it works! This book is a fine introduction to the method, and all-around inspiring. P.S. Her video beats a cup of coffee.

8. The Art of Intuition
by Sophy Burnham
A broad and knowledgable overview of issues related to and methods for accessing intuition, this is a most unusual book because it is written by a mystic and a literary artist: one and same person. Though Burnham is best known for her New York Times best-selling books on angels, some of her earlier books, especially The Art Crowd and The Landed Gentry, deserve far more recognition than they have yet received.

9. The Permit That Never Expires
by Philip Garrison
Anyone who wants to understand Mexican immigration should read this book -- and it's a gripping read, for Garrison is at once stylish, unusually perceptive, wryly humorous, and, above all, both compassionate and deeply knowledgeable. This is an astonishingly original and important work.

10. Cognitive Surplus: Creativity and Generosity in a Connected Age
by Clay Shirky
I don't know Clay Shirky but, from his description of his childhood, we could have been next door neighbors, for I too recall hours planted, zombie-like, in front of Batman and Gilligan's Island. So what happens to our culture as a whole when we move from passive to active-- even for the merest smidgen of time? As they used to say on Batman, "sha-zam!" (Only Clay Shirky could get me to sign up for LOL Cats. Oh, yes, it was a-meow-zing.)