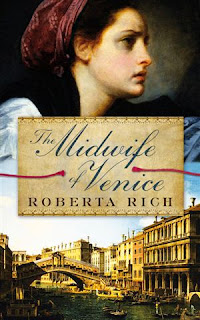 To write, one must first read, and to write historical fiction, goodness, one's reading can get exotic indeed. It's a very special delight to host my fellow novelist-- and a fellow English language writer-in-Mexico-- Roberta Rich, author of the hot-off-the-presses The Midwife of Venice (Random House Doubleday Canada), an historical thriller about a Jewish midwife who breaks the law and endangers the Venetian ghetto by delivering a Christian baby. As Rich herself puts it, "When in a facetious mood, which is often, she describes her book and being the story of a nice Jewish girl with really poor impulse control, who lived in 16th century Venice." Roberta currently lives in Colima, the Eden-like lime capital of Mexico, perhaps most famous as the fictional "Comala" of novelist Juan Rulfo.

My life as a writer of historical thrillers is not an easy one. I need to know how people in the 16th century cooked their food, went to the bathroom, had sex, had babies, and thought about
their spouses and their children. What kind of clothes did people wear in 16th Constantinople and how they washed them? The six books I schlepped down to Mexico this year to answer these and other pesky questions as I worked on the
sequel to The Midwife of Venice were:

1. The Book of Jewish Food: An Odyssey from Samarkand to New York
by Claudia Rodan
This is a cookbook, history book, family memoir, and account of the Jewish Diaspora. Rodan is a culinary Scheherazade. I am not tempted to prepare any of the recipes, not being a lover of stuffed lung or cholent but I eagerly await her next book. Rodan’s writing is as personal and intimate as if she was chatting to you in your Aunt Rivka’s kitchen making kugel. (>>More Jewish recipes click here.)


2. Court Midwife
by Justine Siegemund
This remarkable woman, midwife to the Hapsburg family in Germany in the 1700’s, wrote a manual of childbirth practices complete with beautiful engravings. The tone of the book, instructional and reassuring, is written as a dialogue between herself and an apprentice. The book is an insight into how surprisingly advanced the knowledge
of obstetrics was in those days. (>>More reading here.)

3. Brilliant: The Evolution of Artificial Light
by Jane Brox
The breadth covered by Brox is staggering―- from burning lumps of stinking fat in the Pleistocene age, to tallow and beeswax candles in early modern history to the wearable LEDs of present day. I bought it for my husband who is an energy economist. Poor guy. He hasn’t had a chance to look at it yet and it was a Christmas present.

4. Turkish Embassy Letters of Lady Mary Wortley Montagu
Lady Montagu was the wife of the English Ambassador to Turkey in 1716 and a keen observer of women in Ottoman Turkey. Her observations are interesting, sometimes a bit tart, but never judgmental. One of her best letters is written to Lady Rich, who, my overheated imagination tells me, was an illustrious ancestor of mine. On her
deathbed Lady Montagu’s exit line was, “It had all been very interesting.”
(>>More reading on Turkish harems here.)

5. Everyday Life in Ottoman Turkey
by Raphaela Lewis
Ms. Lewis is a lover of all things Ottoman. Her book is rich in the kind of kinky and strange detail novelist need such as lead ladling as a means of foretelling the future and tales of the beloved Hoza Nasreddin, a Turkish figure in folklore and homespun philosopher. >>More reading on Turkish customs here.

6. The Perfect Red
by
Amy Butler Greenfield
Cochineal was a dye made from the bodies of crushed insects. It was introduced to Spain and then to the rest of Europe when Cortes saw it in the markets of Tenochtitlán in the early 1500’s. He realized its value as a dye, pigment for paints and a cosmetic. The villain in the book I am working on now, steals some of this precious dye and does something very nasty with it. Ms. Greenfield has a lovely website in which you can see a video of her, dying a piece of silk with cochineal.

---> For the archive of all Madam Mayo guestblog posts click here.

>>Most recent guest-blog: Novelist Ellen Meeropol on 5 Political Novels to Change the World