Little Walls Against the Technium (as of 2011) 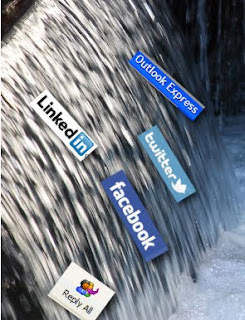 Re: Swiss Miss's lament about "too many channels," what with texting, Skyping, e-mailing, FBing, and hence, the general, guilt-laden feeling of o-ver-whelm. I hear ya, sister. The walls aren't high enough to keep out all the waters, but there are some walls. It occurs to me to note what mine are as of March 2011. (Note: This is not an exercise in self-congratulation; the walls definitely need to be higher-- and not to keep communication out per se. My goal, in all this Niagara of craziness, is respond in a more timely and respectful way to communications from family, friends, colleagues, students, and readers.)

No to LinkedIn
Yes, I have an account but I haven't logged in in oh, I guess it's been about a year. Almost every day someone sends me an invitation to join them, and--- nothing personal--- I ignore it. I have to ignore something! (If you really do know me, "friend" me on FB and/ or send me an e-mail.)

A Wet Towel Upon Twitter, Sort Of
Ay, is anyone really reading my tweets anyway?!? It's a ridiculously inefficient way to have a conversation. Yes, I do see some traffic to my blog because of Twitter, but not enough to justify the bother of logging in and (sigh) having my visual field cluttered up with other peoples' tweets. But I admit, I have changed my mind about Twitter about four times now. Follow me @madammayo (P.S. Here's what I had to say about Twitter in 2009.)

Scroogy with Skype
Only four people have my skype address, and one of them has died. The others will die, too; the question is when. (If you are one of those four, please don't die, OK?)

Texting is a Truly Terrible Idea
OMG, no. I used it once, for one day in Istanbul, where my Mexican cell phone did not work. That was enough. My thumbs thank me. The Goddess of Punctuation thanks me. Any and all hotdogging (don't ask) thumbsters who feel the need to text me can use FB or email.

UPDATE 2016: For reals, I do not text. For me as a writer, texting is poison, and email, which is necessary, is already more than enough of a channel of communication.

To Avoid Receiving Phone Calls, Live in Mexico City
As I do... People just can't figure out the area codes, which have how many 5's? It might be easier to call Afghanistan! Yes, I do get telemarketers, but I hang up with such infinite smoothness, I forget they just called.

In the US, check voice mail twice a week
At most. If I can remember. (If it were really important, they would have e-mailed.)

I Would Hammer In My Television For Fun!
My ongoing fantasy is to take a hammer to the screen, but my husband, who occasionally watches the news or baseball, would not appreciate that. Anyway, there are so many channels on the cable service he's subscribed to, I can't figure out where to start watching, and whenever I do start watching, I get a headache. Seriously, I don't watch television.

Silly Cell Phone, Almost Never with a Battery
I just continually forget to charge it! And then, a lot of times, even if it is charged, and stashed in my purse, I forget to turn it on! It has this very cool xylophone ringtone and I have never figured out how to get it to work! It vibrates silently, ayyy!

Yea, Verily with Reluctance, to Facebook
It's become a broadcasting platform of sorts, yes, it actually does help sell books and fill reading venues, so I'm there, and every twice in a blue moon, I'll update my status. This blog's feed is integrated into FB's "friend feed," so it no doubt appears I am on-line at FB more often than I really am. P.S. I am sorry, I am not interested in sharing what I am eating, and I don't really care about what you are eating, either, even if you really are my real (not just FB) friend, unless we are actually, like, in meat space, eating together at, like, a table in like, a restaurant. It makes me sad to see social interaction having descended to the level of "like" and "poke." Oh well!

With Red Room, booktour.com, goodreads.com, SheWrites, FB Fan Pages, etc, Bring on the VA
All the social networking sites for books and writers-- that's what I have a virtual assistant for! And she bills me via PayPal on the 15th of each month! And I love her!

UPDATE 2015: Not anymore! I don't bother with any of that anymore and Red Room went dark.

Blog
On a schedule. This blog is updated on Mondays, and sometimes in between; my other blog, Maximilian ~ Carlota, is updated on Tuesdays (unless I'm traveling).  once in a while. I used to blog whenever I felt like it. That, I learned, was not a good idea, if I wanted to continue to publish books.

When It Comes to E-mail...Viva, file folders in Outlook Express! More about that anon. Way anon. Ayyy. Back to the Niagara.