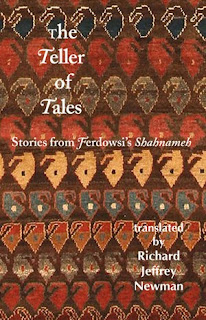 Was it at the Associated Writers Programs conference or the American Literary Translators Association conference where I met Richard Jeffrey Newman? Or both? It has faded into the misty recesses of my ever-addled memory, but I do recall a sparkling conversation about translation. My own specialty is contemporary Mexican fiction and poetry; Richard's is much more daunting: Persian. I have more admiration than I can say for his latest work, The Teller of Tales (Junction Press 2011), the American English translation of a part of one of the greatest works of Persian literature, Shahnameh (Book of Kings), by the 10th century poet Abolqasem Ferdowsi. In one of the longest poems ever written, Ferdowsi relates the episodes of the country's mythical beginnings all the way to the Arab Muslim conquest in the 7th century-- in Newman's own words, "a narrative that, even today, is central to the collective and individual sense Iranians have of themselves as Iranian." (Read an excerpt from the The Teller of Tales here.)

Newman is, of course, a poet, and I say "of course" because poets make the best literary translators. His own book of poetry, The Silence of Men, was recently published by CavanKerry Press. Richard served as Per­sian Arts Festival’s first Lit­er­ary Arts Direc­tor, and he con­tin­ues to co-curate the monthly Shab-e She’r (Night of Persian Poetry) that Per­sian Arts Fes­ti­val holds from Sep­tem­ber through June at the Bowery Poetry Club. He is Asso­ciate Pro­fes­sor of Eng­lish at Nassau Com­mu­nity Col­lege in Gar­den City, New York, where he coor­di­nates the Cre­ative Writ­ing Project.


Shahnameh Historical and Cultural Questions – This page on the British Library website provides a very good overview of the historical and cultural importance of the Shahnameh.

Rostam: Tales From The Shahnameh – Rostam is a Hercules-like hero whose adventures in the Shahnameh are among the best known narratives Ferdowsi produced, especially the story of how he unwittingly kills Sohrab, his own son. Rostam: Tales from the Shahnameh brings Rostam's stories to life in comic book format.

Sohrab and Rostam – In this example of naqqali, a kind of traditional storytelling, Iraj Anvar performs the story of Sohrab and Rostam. Ralph Martin provides the English narration.

Pawn of the Gods or Independent Man – This article, by Antares Alleman and Arash Manzori, which I published in a special, Iranian-literature issue of the online journal ArteEast Quarterly explores the differences and similarities between the heroes in the Shahnameh and those in the Odyssey.

The Shahnameh used by the British as anti-Nazi propaganda – The central story in The Teller of Tales concerns the rule of Zahhak, an evil king whose reign is marked by a murderous depravity, epitomized by the fact that he had to feed human brains to the serpents growing out of his shoulders. If you scroll down to the end of this essay—which is about British World War II propaganda in general—you'll be able to see the five postcards the British produced in which they portrayed Hitler as Zahhak, a message they hoped would keep Iran loyal to them.

---> For the complete archive of Madam Mayo guest-blog posts, click here.
Last up: Daniel Olivas on 5 Books for the Writing of The Book of Want.
Posted by C.M. Mayo at 9:59 PM