Song lyrics to be chanted to slow but peppy bongo drums. OK, I'm not getting a record contract anytime soon as MADAM MAYO & THE CUBAN EXPRESS TRAIN. Though I guess I could go on Kickstarter (eh, too busy answering emails...)

Check out this video of Amanda Palmer, she of those most Berlinesque eyebrows and bodacious stage presence, on The Art of Asking. Now why, pray tell, is Amanda Palmer's TED Talk on Madam Mayo's cyberflanerie "bot edition"? Because everything Ms Palmer is so enthusiastic about doing, from tweeting to couchsurfing to Kickstarting-- and, most essentially, giving her music away for free and receiving money from fans-- is mediated by bots. Bots: our invisible software slaves.

In the book business (my home planet), everyone is talking about disintermediation, that is, authors skipping the agents and traditional publishers and going direct to their readers with self-published Kindles and POD, etc.-- but let's keep in mind, it's not so much disintermediation as it is replacing the human intermediaries with bots-- and those are, in the overwhelming number of instances, owned by a corporation, e.g., amazon.com and iTunes.

Don't get what I'm talking about? Imagine going into a traditional bricks-and-mortar bookstore. For you, the reader, to buy a book, published by, say, Random House, a whole crew of human beings had to, variously:
write, agent, edit, design, format, print, box, ship, receive, market, stock, and ring it up at the cash register.

When you order a Kindle on amazon, however, while most likely a human being wrote it (though there are already books written my computers), there is:
possibly no agent; possibly no editor; possibly no marketing other than uploading the epub to the seller's site (received by a bot of course); no printing (it's digital), ergo, no physical shipping; a bot brings up the title when you type in into the search box; a bot registers your order; a bot charges your credit card; a bot delivers your order to your device.

So is this really disintermediation? Hmm?

More bot amazingness in this talk by architect Michael Hansmeyer, also for TED.

(So how soon until the 3D printers start churning out pearly wonder huts?)

Changing subjects only somewhat, here's a robotoid sculpture, so mesmerizing to watch as it so elegantly churns its way down the beach:

Check out the mini-strandbeest, printed in 3D.

Love this fun little bot (let's pat it on the head...) called the Pulp-o-Mizer which generates pulp fiction covers for whatever you want to type in and/or select. 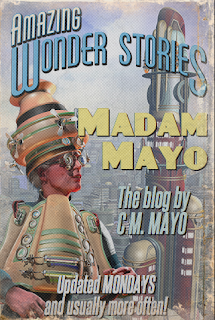