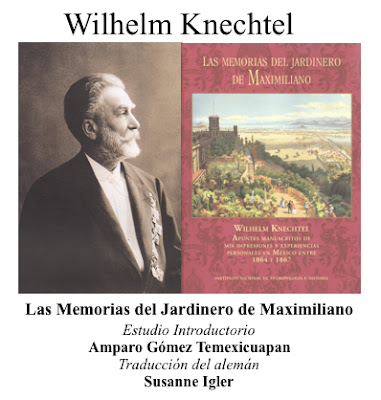 Over at my other blog, Maximilian~Carlota, sharing research on 1860s Mexico's Second Empire or French Intervention:


An important and very handsome book has just been published by Mexico's Instituto Nacional de Antropolía e Historia: Las Memorias del Jardinero de Maximiliano, the personal memoirs of Maximilian's gardener, the botanist Wilhelm Knechtel, of his years in Mexico, 1864-1867. The text, originally published in German a century ago, has been translated for the first time  by noted scholar Susanne Igler (author of Carlota de México) and introduced by one of Mexico's leading experts on Maximilian and the Second Empire, Ampáro Gómez Tepexicuapan. The edition also includes a cornucopia of rare photographs, cartes-de-visites, full color illustrations, maps, and an extensive bibliography.

As Tepexicuapan writes in her introduction (my translation into English here), "to be the Gardner to the Court was, and surely will continue to be, an enviable title. The garden is the recreation of Eden and, at the same time, an expression of power."

Maximilian, an avid botanist himself, considered his gardens a public display of elegance, order, and learning, and in almost all his many residences, he worked closely with Knechtel: herein lies the importance of this wonderful, anecdote-filled book.

Knechtel was first employed by Maximilian as gardener for his and Carlota's rustic retreat on Lacroma, a small island in the Adriatic. . . .. CONTINUE READING