I am delighted to host guest-blogger Victoria Wilcox who has just published what promises to be a fascinating read, a novel based on the true story of Doc Holliday-- one wild dentist, I'll say. Usually we think of Doc out west, slinging a gun, but he hailed from the Old South and had some surprising connections there, as Wilcox explains. And she ought to know: not only did she write the novel about him, but she is founding director of Georgia’s Holliday-Dorsey-Fife House Museum, the antebellum home of the family of Doc Holliday. It was her work with the house that led to eighteen years of original research and inspired her novel trilogy, Southern Son: The Saga of Doc Holliday. Inheritance, the first book in the Southern Son saga was published this month by Knox Robinson Publishing.

Ghosts of Gone With the Wind: 5 Sites for Scarlett Fans
by Victoria Wilcox 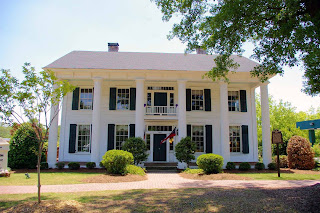 Who would have guessed, when I moved to Georgia hoping to find a few ghosts of Gone With the Wind, that my life would be forever haunted by Margaret Mitchell’s bestselling novel of the Old South?  I was just a fan like any other, having read the book a few times and watched the movie a few times more, the only exception between me and other fans being an interesting calendar connection: I was born on Margaret Mitchell’s birthday, November the 8th.   But when my love of history and a project to save a Gone With the Wind style historic site led to my novel trilogy, Southern Son: The Saga of Doc Holliday, the epic story of the South’s most famous Western legend, our shared birthday began to seem downright spooky – November 8th was also the date that Doc Holliday died.
The historic site was the Holliday-Dorsey-Fife House, the antebellum home of Doc Holliday’s cousins in Fayetteville, Georgia, a classic white-columned Southern mansion where Doc played as a child, and where he began a young romance with his cousin Mattie Holliday, the girl who would become the model for Melanie in Gone With the Wind.  The Hollidays were kin to Margaret Mitchell, and she was said to have visited the house and suggested it as a filming site for the movie version of Tara.  The place is even mentioned in the first chapter of Gone With the Wind, as Scarlett O’Hara attended the Fayetteville Academy, a private school once housed there.
While Scarlett was fictional, however, there was a real Southern belle who really went to the school and had a lot in common with Scarlett: they both lived on big cotton plantations in neighboring Clayton County, they both had feisty Irish fathers named Gerald, they both had genteel mothers who had green velvet drapes in their parlor windows, they both went to Atlanta during the Civil War and survived with a little bit of grace and a whole lot of “gumption.”  The real girl was Annie FitzGerald, and she was Margaret Mitchell’s grandmother.
It’s no wonder Gone With the Wind seems so real to its readers.  There was a lot of truth behind its story of the Old South, and a better-than-fiction link to the Wild, Wild West.  These ghosts have a great story to tell!
For more real tales of Gone With the Wind, check out the following five sites: 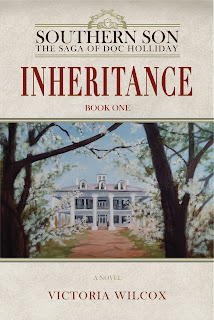 The Margaret Mitchell House Museum, the Atlanta apartment when the author typed her epic tale.
Scarlett O’Hara’s Atlanta, an interactive map that takes you into the 1860’s city.
Gone With the Wind Scrapbook, a fun collection of all things Scarlett.
Gone With the Wind Online Exhibit, movie memorabilia from the David O. Selznik collection at the Harry Ransom Center, University of Texas at Austin.
Gone With the Wind Background from the AMC Filmsite Movie Review, gives a complete synopsis of the movie for who haven’t watched it but want to sound like they have.

>Click here for the complete archive of Madam Mayo's guest-blogs.