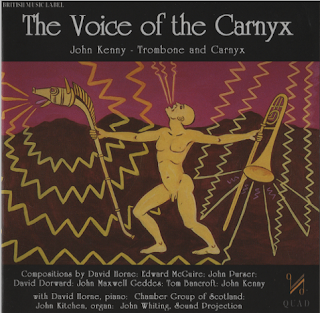 As those of you who follow this blog cannot but know, I am working on a book about Far West Texas. That means, of course, piles of reading about Jumanos, Mescalero Apaches and Comanches. To try to see past some of the cliches, I've been reading into outer Europe's deep history, and as it happens when one reads deeply, things start looking mighty strange.

Behold the Celtic war horn known as the carnynx. Think of it as cross between a submarine's persicope and a didjeridoo. Supposedly it drove the Romans bonkers.

John Kenney "The Voice of the Carnyx"
"The first piece ever composed for the carnyx" by trombonist and composer
Link goes to a 6 1/2 minute recording on YouTube.


"The Carnyx was once common throughout much of Europe, although only five fragments are known to us, of which Deskford is the finest. It flourished between 300BC and 200AD, and found widespread use in Britain, France, parts of Germany, eastwards to Romania, and beyond. Bands of Celtic mercenaries took it on their travels; Carnyces were present at the attack on the Greek sanctuary at Delphi in 279BC; Carnyces defied Julius Caesar in Gaul; Carnyces faced Claudius when he invaded Britain. They are often represented on a sculpture in India, proof of the far-flung connections of the Iron Age world." 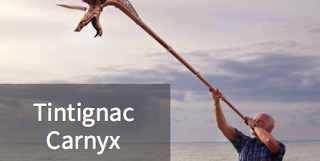 Carynx & Co.
John Kenney and Ian Ritchie's charitable company "which provides a unique interface between musical archaeology and the world of contemporary performance and recording".
Includes the page "Titingnac Carnyx" about the reconstruction of a 1st century BC carnyx unearthed in the south of France.

P.S. The most bodacious place on earth to toot your carynx.

Your comments are ever and always welcome.

On the Trail of the Rock Art of the Lower Pecos

I welcome you to sign up for my newsletter
which goes out every other month-ish.
Click here.
Posted by C.M. Mayo at 11:19 AM