READ THIS POST ON THE NEW PLATFORM www.madam-mayo.com
I wasn't planning to post this since it's not a complete essay, only an introduction to a panel, but it has come up in so many conversations since the panel was held this past February, I thought I'd offer it here-- and with links in case you'd like to learn more about these extraordinary writers.

INTRODUCTION TO THE PANEL
GLOBAL MIGRATION: PEOPLE AND THEIR STORIES 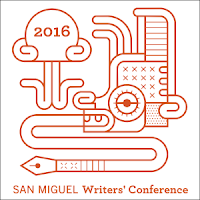 Good morning, Buenos días! Bienvenido! Welcome! What an joy of a conference this is. If my memory serves me, I participated in what was the very first of these conferences. I know it was more than 10 years ago. And that was an outstanding conference, but wow, it has gotten not only bigger but better and better. What we have here in this conference is unique: A gathering in the heart of Mexico, of writers from Mexico, writers who may or may not be Mexican living in Mexico, writers visiting Mexico, writers from so many different cultures.

The day before yesterday, here, over there by one of those big white tents, I ran into one of my favorite Mexican writers, who happens to be a native of San Miguel de Allende, and baptized in the Parroquía, that otherwordly gothic church that is impossible to miss. Araceli Ardón. She was on the faculty last year, and some other years. So I mentioned to Araceli that I was going to moderate this panel today on Global Migration: People and their Stories.

Well, why do we write?

And Araceli told me that in his writing workshop, years ago, Carlos Fuentes—who was, without a doubt, one of Mexico’s greatest writers— Carlos Fuentes said something that, like a beacon in the night, had guided her as as writer. In Spanish, Fuentes said: “La literatura tiene que dar voz a los silencios de la historia."

Literature must give voice to history’s silences.

As we go on with this panel, I would like to invite you to keep those words of Carlos Fuentes present in your mind.

Global Migration: it’s in the news. We see it, we hear it, we read about it every day. Those of us who are from the US and Canada are keenly aware , on many levels, of our histories with migration, and this includes, in most cases, our own family histories.

For those who are new to Mexico-- and I know that quite a few if you are--an extra special welcome to you.

I’d like to underline something that could be... shall we say... fruitful to keep in mind as we proceed, and that is that Mexico, too, has had and continues to accept important numbers of immigrants. For example, Mexico’s literary figures include many who were immigrants or descendants of immigrants from Spain, of course, but also from Germany— and that includes Carlos Fuentes—from France, Italy, Ireland, Japan, China, Africa, Central America, Cuba, Argentina, Poland (Elena Poniatowska!) and Russia— it’s a long list.

Rose Mary Salum, a Mexican writer of Lebanese descent, recently published a visionary anthology entitled, in Spanish, Delta de las arenas, cuentos árabes, cuentos judíos, a title I would translate as Delta of Sands: Arab and Jewish Short Fiction from Latin America. It is a large and splendid and very interesting book, by the way.

There are also notable flows of migration within Mexico itself. Just to give one example, many people have come from small towns and farms to live in large cities, and in so doing making them larger: Mexico City, Querétaro, Monterrey, Guadalajara, Tijuana... Farm workers, migrant workers, who might go north to Oregon or Florida, also go to the Mexican states of Baja California or Sinaloa.

Another example: Many Mexican artists, professionals and retirees have come from Mexico City have come to live here in San Miguel de Allende—there is quite a bit less traffic, among other attractions.

And Mexico has indigenous groups from Mayas to Nahuas to Zapotecs, and members of these communities have moved all over the map of the Mexican Republic, and beyond. Of course, thousands of years ago, the ancestors of these peoples immigrated to what is now Mexico by way of the bridge under what is now the Bering Straight. And they too have important and rich storytelling, poetic, and literary traditions.

I myself am an immigrant to Mexico. I came from the US to live in Mexico City 30 years ago. So that’s why all my books are about Mexico. And I also translate Mexican writers, which brings me to a Mexican writer I am very proud to say I have translated: Juan Villoro. It was his short story about Mexican punk rockers that appears in my collection, Mexico: A Traveler’s Literary Companion.

Juan Villoro is one of Mexico’s most outstanding writers, and it is truly a privilege, a stellar privilege, to have him here with us.

So now I am going to formally introduce him, as our first speaker. And then, in turn, I will introduce each one of our panel. And then, after each has had the opportunity to speak, for about 10 to 12 minutes, we will take your questions and comments.

The questions at hand are: Why are stories of migration, or stories in some way inspired by migration, so vital? And what is it that elevates them to the level of “literary”? What are the challenges for writers who may be far removed from the culture in respecting their subjects, respecting their own creative process, and, ultimately, respecting their readers? And how is literature itself changing with such infusions?

If you would like to buy an MP3 recording of the entire panel, that is available from the San Miguel Writers Conference here.

P.S. It was at this conference, shortly after this panel, in fact, that I met Texas historian and novelist Carolina Castillo Crimm and she so kindly gave me an inscribed copy of De León: A Tejano Family History. Because I'm writing a book about Texas, I devoured it faster than a plate of Pody's BBQ. I highly recommend it as essential reading for anyone interested in the history of Texas, Northern Mexico, the borderlands, and indeed the United States itself. Check out my Q & A with Carolina Castillo Crimm about De León here.

On Writing About Mexico: Secrets and Surprises
(Centennial Lecture 2015 for the University of Texas of El Paso)

Translating Across the Border

I invite you to visit my "For Mexicophiles" page here.

Your comments are ever and always welcome.

One of these days my next newsletter will go out.
I welcome you to sign up here.
Posted by C.M. Mayo at 11:10 PM