With a Ker-thunking Clash of Gamelan Puggy Hooha: On 10 (TEN!) Years of Blogging

The 10 year anniversary of this blog, long looming on the horizon, has arrived with a ker-thunking clash of gamelan hooha. At least in my own mind! And whether you've been with me this long or surfed in a split-second ago, my thanks to you, dear reader.

A shout-out to a few of my blogging friends who've been at this along with me lo these many (or almost these many) years-- you're on my blog roll and in my heart. (I'm waving at you especially, E. Ethelbert Miller and Leslie Pietrzyk.)


Five Conclusions and Aims for 2016 & Beyond

1. I started "Madam Mayo" blog in 2006 primarily to serve as a platform to announce and link to my work available in-print or elsewhere on the web. Such frankness may not sound too tewwibly chahming, I know. It's sort of like waving a wand over the top hat, then snatching away the silk handkerchief to reveal... a bean burrito. Not that my writing isn't yummy, if I do say so myself! But clearly, it would behoove me to jazz up ye olde blog up with, say, more pugs. Oh! Here's a GIF of Uliberto Quetzalpugtl (b. 2014). I asked him if he wanted a bean burrito.

This still seems like a fine idea, I mean, both using my blog to point to my books and other writing available elsewhere, and to bring on the pugs. 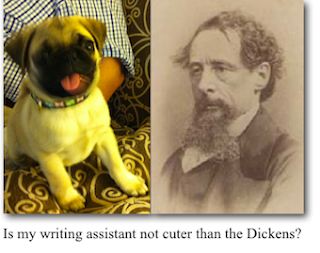 And here are some of my books, all of which have to do with Mexico, two of which have a lot brown in their covers, and all which do happen to mention Mexican cuisine (but not bean burritos):

(P.S. If you're new to this blog and wondering why my books are all about Mexico, click here for the "secrets and surprises".)

Seriously, though, over the years I have come to see this blog as more than a mere platform. As I wrote on the eighth anniversary of this blog, I think of "Madam Mayo" not so much as a "platform" but as "a net that catches certain special fish-- the readers who care about the things I care to write about."


2. Over the past decade the "top list-worthy" posts for this blog were the ones I wrote as exercises in clarifying my own thinking. Sometimes I was working out ideas that would appear in my books (as with this book review and this book review and this mash-up on Francisco Madero and Dr. Krumm-Heller); other times such posts were for my workshop students or just for myself. My personal favorite is this post. I reread it now and again, and try to take my own advice.

So: I aim to continue blogging to clarify my own thinking... and to take my own advice. Hence, herewith another pug GIF! This one is of my writing assistant / aka mystical little beast Picadou (2000-2014) and her doting godfather, Mexican actor and James Dean-channeler Fernando Catorri.

The thing is, when three people ask me the same question, I can probably expect more of the same, and when my best answer is a more than a little bit lengthy, opinionated, and technical, the easiest thing for all concerned is for me to send my correspondent the link to my blog post. And of course I am delighted if any one else finds said posts of use and/or interest. Like I said, they were written in a spirit of helpfulness.

Since I've already tackled just about every question I can about writing and publishing, I aim to write more travel articles because the one question I keep getting is, what is there to see and do in Mexico City? (I do wish more people would ask me about Far West Texas.)

(Why don't I publish more often in magazines and newspapers such as LA Times and WSJ as in days of yore? That's another post.)

4. Over the past decade I started up then phased out guest-blogs that followed what I called my super-simple "5 link format." A chubasco of lotus jpegs upon y'all, dear fabulously talented guest-bloggers! (See the archive of "Madam Mayo" guest-blogs here). But alas, it was too much trouble to seek them out, then edit and format them, so, sorry, dear reader, you will just have to settle for guest-appearances by my mystical little beasts. Here is Uliberto Quetzalpugtl demonstrating the Orphic Journey:


But seriously, albeit not via guest-blog posts, I aim to continue seeking out and featuring other writers whose work I admire. Over the past couple of years, and especially since 2014, I started running infrequent Q & As such as this one with historian Carolina Castillo Crimm and this one with historian Paul Cool and this one with writer and editor Michele Orwin. These are far more work to prepare, yet far more satisfying for me, for the other writer, and for my readers (so I am told). It's hard to say how often I'll feel comfortable doing these Q & As, but my guess is, probably every other month or so.

(Yes, I am still running my Conversations with Other Writers podcast, but it's an unholy amount of work to edit audio, so for now I plan to post those on a more or less one-podcast-a-year basis.)

5. Another type of post I started up and then phased out was what I call "cyberflanerie." In 2016 I'll let other blogs, such as Swiss Miss, Brain Pickings, and Marginal Revolution natter around with that sort of browsing and curating, fascinating fun as that is. My aim for 2016 is to fry the monster.

1. Look for posts every Monday, except when not, and oftentimes more often.
2. Your emailed comments are ever and always welcome. But no, I won't be publishing comments on the blog itself.
3. Look for occasional Q & As, book reviews and, at year-end, my top 10+ books read list.
4. Look for more posts about Texas, Far West Texas, and literary travel writing-- may this be the year I finish the draft of the book.
5.  My philosophy of blogging, that it is not so much a platform (although, yeah, it is) but "a kind of net, to catch the readers who care about what I care to write about" remains essentially unchanged from a couple of years ago. See Writers' Blogs (and My Blog Blog): Eight Conclusions After 8 years of Blogging, my talk for a panel on writers blogs at the 2014 Associated Writers Conference.

And finally, know that you have my appreciation, dear reader.

What Happened to Thelma: A Story of the Far Future

Your comments are always welcome.