On the Death of Maximilian: A Translation from the Hungarian 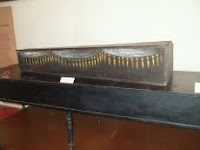 Over at my other blog, Maximilian ~ Carlota, where I share my research on Mexico's Second Empire, a tumultuous period also known as the French Intervention, the Tuesday update:

An eyewitness memoir by Dr Szender Ede, who served with the French in Mexico from 1865, and later had quite a bit to do with the aftermath, was published in a Hungarian newspaper in 1876, and has been translated into Spanish. Warning: it's not for the timid of stomach.... CONTINUE READING