Art, Life and UFOs: A Memoir by Budd Hopkins 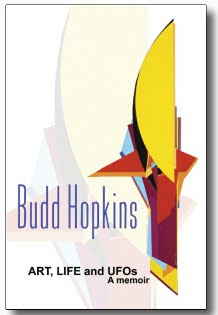 Imagine if your dentist also enjoyed an international career as a leading shoe designer, or say, your neighbor the Hip-Hop star turned out be, by day, an high-level insurance executive. Those are just a couple of the bizarre analogies that come to mind when I think of Budd Hopkins's tandem careers as a world-class abstract expressionist, palling around New York City with Motherwell, Kline, Rothko, de Kooning, and others, and as a leading researcher of the UFO abduction phenomenon.

I first heard of Hopkins several years ago when I began to read about UFOs, originally as research for a fiction project and later, out of genuine curiosity. Curiosity: strange, how little most people have when it comes to UFOs. (Want to clear out a dinner party fast? Just bring up the subject.) Perhaps this is because it takes more courage than most people have in the face of such disturbing information. Disturbing indeed; horrifying. Yet, subtract all the UFO material and Hopkins' beautifully written memoir would still be fascinating and important reading.

For me a crucial question is, what does it take to fuel serious art-making decade after decade? There are thousands upon thousands of artists, most of them ambitious kids and a few middle aged wannabes. But to continue to make serious art after those first workshops, after the first, second, and fiftieth rejection, and into one's 60s, 70s, and beyond, takes a very rare fuel, a kind of stubbornness wedded to vision and infused with playfulness and curiosity. Curiosity: there's that word again.

Art, Life and UFOs: A Memoir