It's a very special honor to host Sam Quinones this Wednesday because he is one of the writers I most admire. Some years ago, I gave his book True Tales from Another Mexico a heart-felt rave review in the Wilson Quarterly. Later, when his collection Antonio's Gun and Delfino's Dream came out, I placed it on my top 10 list for 2007. Quinones writes about Mexico and Mexican immigrants, and with more originality, insight and sheer grit than anyone else out there. (As someone who is married to a Mexican and has lived in and written about Mexico for 25 years, I'm not an easy customer in this department.) Sam Quinones's writing is something very special, so waste not a minute, go read his books-- after you read his guest-blog post, that is. And send him your true tale. 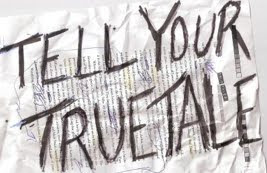 Hi there. I’m Sam Quinones. I’m a reporter and author of two books about Mexico and Mexican immigration.

Tell Your True Tale is me trying to get folks to write true stories and send them in. I put them on my website. The latest postings, for example, are two women’s crime stories, Monah Li's "Speed Kills", and Carrie Gronewald's "The Green River Camp Fire". (Many others are up as well.)

Storytelling is the idea here— something that happened, a moment, an event. Something small; something big. Could have happened to you, or a friend, a coworker, relative, or someone you met at a café. Just needs to be true.

Like C.M., I don’t pay. But I do edit, and sometimes rather vigorously, rewriting being the essence of writing.

I encourage you all to think about stories you might have. Put ‘em down and send ‘em in.

American Stories by Calvin Trillin
Amazing stories from the master storyteller in U.S. journalism. Trillin tells the story of Edna Buchanan, ace crime reporter for the Miami Herald; of Ben and Jerry’s Ice Cream; of the battle surrounding the estate of doo-wop crooner Frankie Lymon. The story on John Zeideman, a young man who died in China, is terrific.

Killings by Calvin Trillin
Stories of how people died violently, by the master again. “Todo Se Paga,” about the Casa Blanca neighborhood of Riverside, California, is fantastic.

The Heart That Bleeds by Alma Guillermoprieto
Stories from Latin America by a great reporter. Her story on the trash boss of Mexico City is a gem.

Stories by Anton Chekhov
Okay, it’s fiction, but the kind of stories to read when you’re writing true tales. What we’re after is nonfiction stories that read like fiction. 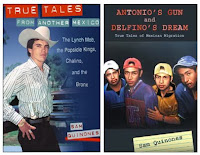 My books. They’re great. Stories of the Michael Jordan of Oaxacan Indian basketball; of the Henry Ford of velvet painting; of the Tomato King and the Popsicle Kings; of a lynching in a sweltering backwater; of how opera emerged from Tijuana’s broken and cacophonous streets; of Chalino Sanchez, the most influential musician to come out of Los Angeles in the last generation; And, finally, of my escape from Mexico, chased out by wacky, drug-smuggling old world German Mennonites from northern Mexico.

-True Tales From Another Mexico: The Lynch Mob, the Popsicle Kings, Chalino and the Bronx

www.samquinones.com
(*I’m selling this one myself, hardcover, signed, for $10 apiece. Write me at samquinones7@yahoo.com)

That’s all folks. Really would love to see some stories. This is getting fun. What I’ve seen up to now is great and I can’t wait to see more.

For the complete archive of Madam Mayo guest-blog posts, click here
Posted by C.M. Mayo at 12:01 AM