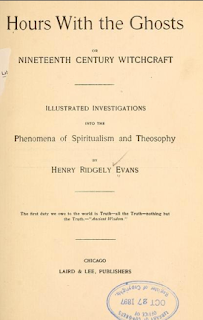 Finishing up the last edits on the second, revised and expanded prologue of my translation of Francisco I. Madero's Spiritist Manual of 1911. (For those new to the blog, Madero was the leader of Mexico's 1910 revolution and President of Mexico 1911-1913.) One of the additions to my prologue is a bit more from and about Henry Ridgely Evans (1861-1949), a magic historian who also happened to be a childhood friend of Agustin de Iturbide y Green (who also comes into the revised prologue).

Like Madero, Evans was a 33 degree Mason, and intensely interested in anomalous phenomena. Madero was a convinced Spiritist and, though influenced by the Theosophists, in particular their enthusiasm for the Hindu epic the Baghavad-Gita, from his correspondence we know that he  apparently, if diplomatically, disapproved of Madam Blavatsky, et al.

Evans, born in Baltimore and a long-time resident of Washington DC, was not a Spiritist but an expert magician and prolific author-- and he disparaged Madame Blavatsky and other Theosophists at length in one of his best known books, Hours with the Ghosts or Nineteenth Century Witchcraft (Laird & Lee Publishers, 1897). This is an out-to-Mars-expensive collector's item, but fortunately for us, a digital edition of this book is now in the public domain and available free online at archive.org.

In Hours with the Ghosts, Evans looks at many of the more popular mediumistic displays of the age-- slate writing, table tipping, levitation, apports, spirit photography and so on-- with a magician's practiced eye. While he debunks many of mediums as mere entertainers, he nonetheless remains open to the possibility that there may be some unexplained psychic phenomena operating in some cases (notably Eusapia Palladino), and he accepts telepathic communication, again, in some instances.

Here's the fake "spirit photograph" Evans made to illustrate how it was done: 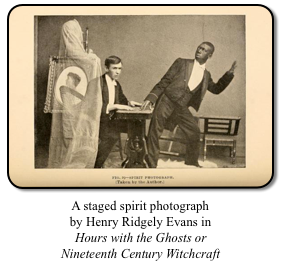 My favorite Evans quote (gives you a flavor of his tone):

Everyone loves mysteries, especially when they are of the Egyptian kind. Cagliostro, the High Priest of Humbug, knew this when he evolved the Egyptian Rite of Masonry, in the eighteenth century.


(Evans also wrote a biography of Calgiostro; an article by Evans in The Monist is available on archive.org: Cagliostro: A Study in Charlatanism.)


P.S. The second edition of my translation of Madero's 1911 Spiritist Manual, with my all new book-length prologue, Metaphysical Odyssey Into the Mexican Revolution, will be available in October.


***UPDATE 2014 My book, Metaphysical Odyssey Into the Mexican Revolution, is now available***