Urim and Thummim, Revelation and Truth in the Burned-Over District

For those of you new to the blog, Madero was the leader of Mexico's 1910 Revolution and President of Mexico from 1911-1913. So, as you might imagine, his "secret book" has more than a little historical relevance.

A note today about one of the more esoteric images that will be included in the Spanish edition: "Urim and Thummim," the pair of "peep stones" or "spectacles" used by Joseph Smith to translate the Book of Mormon. No one has seen them (he said he gave them back to the angel Moroni), but there are several eyewitness descriptions in the literature of the history of the Church of the Latter-Day Saints. Pictured here (a little extra spooky!) is my take on the spectacles. The black background plays with the stories that Smith put his hat in front of his face while wearing Urim and Thummim, the better to divine the translation of the Book of Mormon.

(What does this have to do with the leader of the Mexican Revolution and President of Mexico, Francisco I. Madero? Well, not much, for he was not a Mormon, but his Spiritist beliefs had vital roots in the so-called Burned-Over District of New York state, whence Mormonism emerged shortly before Spiritualism --and Spiritism emerged shortly thereafter in the works of Allan Kardec in France.  Also, Urim and Thummim were used for what is otherwise known as scrying, that is,  divination by gazing into a stone, a mirror, crystal, water, smoke, etc. Many Spiritists, interested in all things psychic, also delved into scrying-- though, for the record, I have not heard of any using such "spectacles".)

So, what are Urim and Thummim?

In Judaic tradition, these are divining stones in the high priest's breastplate, and according to the on-line Jewish Encyclopedia, the Hebrew words inscribed on the stones mean "revelation and truth" or "lights and perfections."

The official Bible Dictionary of the Church of the Latter-Day Saints (Mormons) says this:

Hebrew term that means “Lights and Perfections.” An instrument prepared of God to assist man in obtaining revelation from the Lord and in translating languages.. .Using a Urim and Thummim is the special prerogative of a seer, and it would seem reasonable that such instruments were used from the time of Adam. . . . Joseph Smith used it in translating the Book of Mormon and in obtaining other revelations.

It was in upstate New York in 1823 that Joseph Smith received the vision of the Angel Moroni, who revealed to him the golden plates of the Book of Mormon, which appeared with the Urim and Thummim,


two stones in silver bows—and these stones, fastened to a breastplate, [that] constituted what is called the Urim and Thummim—deposited with the plates; and the possession and use of these stones were what constituted ‘seers’ in ancient or former times; and that God had prepared them for the purpose of translating the book. …

In the article "Joseph Smith's Translation of the Book of Mormon," Stephen D. Ricks notes that Smith used a "seer stone" he had found, in addition to the spectacles or "Nephite interpreters" (that is, Urim and Thummim). Nephites refers to the language of the descendants of Nephi, son of the Jewish prophet Lehi in the Book of Mormon, who (so the Mormons believe) colonized America after 600 B.C. Ricks quotes W.S. Pender, who interviewed Joseph Smith's brother in 1891:


Among other things we inquired minutely about the Urim and Thummim and the breastplate. We asked him what was meant by the expression "two rims of a bow," which held the former. He said a double silver bow was twisted into the shape of the figure eight, and the two stones were placed literally between the two rims of a bow. At one end was attached a rod which was connected with the outer edge of the right shoulder of the breast-plate. By pressing the head a little forward, the rod held the Urim and Thummim before the eyes much like a pair of spectacles. A pocket was prepared in the breastplate on the left side, immediately over the heart. When not in use the Urim and Thummim was placed in this pocket, the rod being of just the right length to allow it to be so deposited. This instrument could, however, be detached from the breastplate and his brother said Joseph often wore it detached when away from home, but always used it in connection with the breastplate when receiving official communications, and usually so when translating as it permitted him to have both hands free to hold the plates. 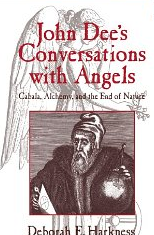 It sounds to me like the ancient Judaic use was cleromancy, whereas Joseph Smith's was more scrying and along the lines of the use by the 16th century English Dr. Dee (link to a book that quotes Dr Dee on his use of Urim and Thummim: Deborah E. Harkness's John Dee's Conversations with Angels: Cabala, Alchemy, and the End of Nature, Cambridge University Press, 1999).

A batch of relevant links (surf ye on):


+Dr Dee's Mexica (Aztec) mirror (link to British Museum)
Note, however, that expert Deborah Harkness says Dee probably did not use this object for his angel conversations (his scryers would have used his crystal ball or "showstone") and in fact, may not have even owned it. But it's one of those things too tempting to assert...

+ Dr Raymond Moody's Psychomanteum based on the oracle of the dead in Ephyra, Greece (mirrors)


Visit the webpage for my translation of Madero's Spiritist Manual.
***UPDATE Metaphysical Odyssey Into the Mexican Revolution: Francisco I. Madero and His Secret Book, Spiritist Manual***


Your comments are always welcome. Write to me here.