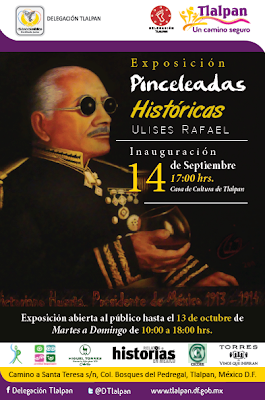 Mexican historical portrait painter Ulises Rafael is having a show at the Casa de Cultura in Tlalpan (Mexico City) with an inauguration on September 14, 2013 at 5 pm. That portrait on the announcement is his "General Victoriano Huerta," Mexico's iconic arch-villian-- about whom, it just so happens, I've been doing quite a bit of research and writing for my revised and expanded introduction to my translation of Francisco I. Madero's Manual espírita (Spiritist Manual). (***UPDATE Dec 2013 My book, Metaphysical Odyssey Into the Mexican Revolution, is now available***)

Well, dig those shades.  Note that snifter of brandy.

For those new to the blog, Francisco I. Madero was the leader of Mexico's 1910 Revolution and democratically-elected President from 1911 to February 1913 when his government fell in a coup d'etat led by Generals Victoriano Huerta and Manual Mondragón (among others). The ten days of fighting are known to all Mexicans as La Decena Trágica.

Here's a brief excerpt from "Metaphysical Odyssey Into the Mexican Revolution or, From the Burned-Over District to Bhima's Book," my revised and expanded introduction to Francisco I. Madero's Spiritist Manual of 1911 (to be published later this fall):

. . . The army, and its powerful general Victoriano Huerta, veteran of years of smashing campesino uprisings, turned out to be a lynchpin in sustaining and, in the end, destroying Madero’s government. Apparently, if anything bothered General Huerta’s conscience, he grabbed it by the throat and drowned it in drink. He was famous for his drinking jags; he would die in early 1916, if we are to believe the U.S. Army surgeons at Fort Bliss, and I don’t see why not, of cirrhosis of the liver.

It was General Huerta who had escorted Don Porfirio and his family to their ship in Veracruz. Huerta who, on the orders of interim President de la Barra in 1911, and much to Madero’s disgust, swept into Zapatista territory, burning villages and executing prisoners; Huerta who, now on orders of President Madero, squashed the Orozquista rebellion in the north in 1912. Huerta, who ordered Pancho Villa’s execution for stealing a horse; Huerta who, grudgingly, obeyed when President Madero ordered that Villa be sent to prison instead.

And let’s not forget General Manuel Mondragón, lean and mean, a gunslinger out of Central Casting with those sludgy eyebrows. Artillery expert and machine-gun designer, General Mondragón was Porfirio Díaz’s weapons procurer, indignant that, thanks to Madero’s head of secret service, Felix Sommerfeld, the bulk of that lucrative business had been taken from his French friends and given to the Germans. (“His feverish eyes hide a fierce inner fire, noted the poet José Juan Tablada. “What can this fire be but burning ambition for power, control, and despotism?”)

Huerta's usuper government did not last long. Here's a good-bye song of the time:

To be alerted when the revised and expanded second edition is available, click here.
***UPDATE Dec 2013 My book, Metaphysical Odyssey Into the Mexican Revolution, is now available***